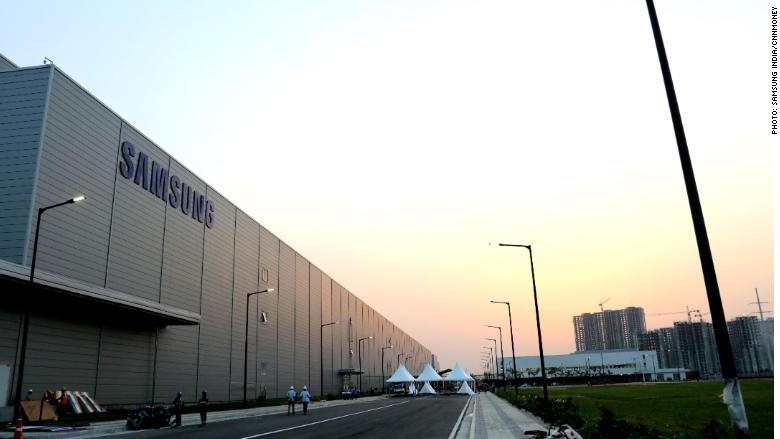 Samsung doubles the growing demand for smartphones in India by opening “the world’s largest mobile factory”.

Built on 32 acres of land next door that of Samsung (SSNLF) Original factory in India, the plant will allow the South Korean firm to almost double the number of smartphones it manufactures in India each year from 68 million to 120 million by 2020.

Samsung India CEO HC Hong described the plant as “a symbol of Samsung’s strong commitment to India and a shining example of the success of the government’s ‘Make in India’ program,” referring to the initiative of Modi to encourage global companies to invest in manufacturing operations in India. the country.

Until six months ago, Samsung was the top seller of smartphones in India, but it was overtaken by Xiaomi – the Chinese rival which was just made public in Hong Kong – in late 2017.

Samsung announced a year ago the expansion of its factory as part of a $ 715 million investment in India.

Xiaomi is also strengthening its presence in India, where its cheaper devices have won over price-conscious consumers. It recently tripled its Indian manufacturing base by adding four smartphone factories in the country.

It now has a total of six factories he says can produce two smartphones per second.

Samsung hopes the smartphones it makes in India will be sold locally and in other markets around the world.

“We hope that with Korean technology and Indian manufacturing, we will produce the best products in the world,” Prime Minister Modi said. “This [plant] is a big step in the direction of making India a global manufacturing hub. ”

Related: Disney’s Next 700 Million Viewers Could Be In India

India has over 300 million smartphone users, making it the world’s second largest market for devices behind China.

And about two-thirds of the country’s 1.3 billion people still do not have internet access. Many of them are expected to connect through smartphones, as mobile data prices have plummeted following a price war started by India’s richest man.