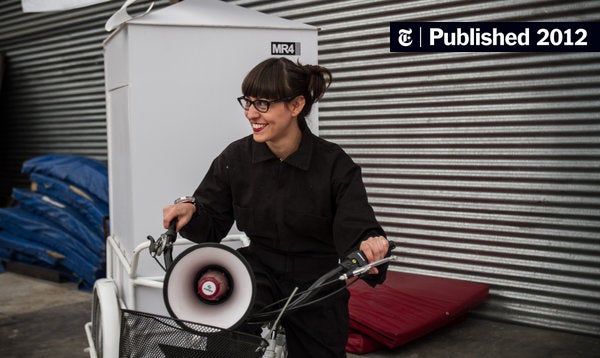 Earlier this month, the team included nearly a dozen women and a young man, all Ms. Muñoz could afford. Many, like Sara Peregrino, 50, were housewives with sewing experience. Others, like 18-year-old David Quiróz, a taxi dispatcher, struggled to thread a needle without drawing blood.

Almost everyone said that the money earned would go towards one of two things: food or Christmas presents. “For women, it is very difficult to find a good job,” said Patricia Zamora, 33, a mother of two who arrived with Ms. Peregrino, one of her neighbors. “There is a lot of work for little pay.

Many women seemed to appreciate the opportunity to get involved in an art project. María González, 75, smiled widely when she was handed a needle and adjusted her purple scarf, happy to create something rather than worrying about her husband in the hospital. “This,” she said, sewing without looking down, “is a wonderful distraction. “

Ms. Muñoz seemed to agree. She stood nearby, waiting for her favorite time of day – when she paid workers and took their photos, which she would post online, related to the artwork. It’s an effort to make workers more visible, she said, but also an allusion to her working-class past.

She grew up playing among the hammers and nails of the hardware store her parents owned in a marginal area like her factory. She said she always enjoyed manual work and never felt comfortable in an office, even after graduating with a law degree.

Textiles had once been a hobby – she used to collect oils, the traditional woven tunics of Mexico and Central America – but when she decided to become an artist in 2006, she returned to fabric and tailoring. His work now involves a mixture of textiles and technology. Many of his pieces involve images stitched with circuitry that allow users to press buttons for sounds or light displays.